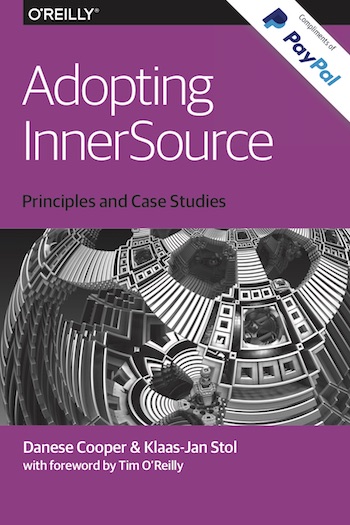 InnerSource is a software development strategy rapidly spreading throughout large corporations - and it is also more. At its essence, InnerSource enables software developers to contribute to the efforts of other teams, fostering transparency and openness to contributions from others. But beyond that, InnerSource represents a collaborative and empowering way of involving employees in making and implementing decisions throughout the corporation. It embodies a philosophy of human relations, an approach to rewards and motivations, and a loose, adaptable set of tools and practices.

In this book, Danese Cooper and Klaas-Jan Stol present a series of case studies at a range of companies to show when and why InnerSource may be useful to your organization. The case studies candidly discuss the difficulties of getting InnerSource projects started, along with the progress so far and the benefits or negative fallout.

In this book you can read about:

Finally, we provide a systematic comparison of the five case studies and offer a number of guidelines to start adopting InnerSource at your organization.

Despite her B.A. in French literature, Danese Cooper has a 30-year career in tech, including senior engineering management and open source strategy positions at Apple, Microsoft, Symantec, Sun, Intel, and most recently, PayPal. She is a recognized leader in the Open Source movement, for her work at Sun and as CTO of Wikimedia Foundation (home of Wikipedia), and for her many years of service on Boards of Directors or as an advisor to well-known Open Source projects including the Open Source Initiative, Open Hardware Association, Mozilla, Drupal, and Apache. Currently she serves as the Chairperson of the Node.js Foundation. Danese founded InnerSourceCommons.org in 2015 as part of a bootstrapping effort for PayPal. She developed and delivers training for organizations and individuals working with InnerSource through DaneseWorks, her consultancy. She speaks internationally on Open Source and InnerSource trends and evangelizes the Open Source ethos far and wide.

As an academic, Klaas-Jan Stol has conducted research on Open Source and InnerSource for the last 10 years. He is a lecturer with the School of Computer Science and Information Technology at University College Cork, a Funded Investigator with Lero — the Irish Software Research Centre, and a Science Foundation Ireland Principal Investigator. The goal of his research is to better understand these novel modes of development work, and what their implications are for the software industry. For example, when Open Source was just emerging as a research topic, most companies didn’t show much interest primarily due to a misunderstanding of what Open Source was. It was also not clear how companies could benefit from Open Source. Over the years, this has changed dramatically due to many research studies on this topic, which are published in academic conferences, journals, and textbooks, which in turn are used in university courses. A similar thing is now happening with InnerSource. While it has been a topic of research for years, there are still many misconceptions about what InnerSource is, and how companies can benefit from adopting it. Klaas tries to close this gap by writing books like this one.